Down but not dirty.

The relative quite  on my desk lately in spite of the enthusiastically penned mission statement earlier, is mostly due to a home project underway at frenzied pace. Yes, am preparing to move yet again... ! Luckily  the move is just to another apartment within the same city.  As the space takes shape over the next few weeks, there will be more to share  until then,  here is a post about ideas.

Have been engrossed in all manner of things. Floors, flea markets, furniture, paint and the like.
Today's post is going to be about an aspect of home dressing that I never really paid too much heed to until a few weeks ago when rotten parquet became a bone of contention. Three floorings needed to be ripped and relaid.  The humble grounds beneath our feet indeed, only somehow they end up making or  breaking spaces completely.

I grew up in a house  with wildly coloured, wildly patterned mosaic tiles.  My grandfather designed  these himself.  I remember watching him supervise the laying under his strict gaze. This was in the early seventies.  Dadaji, had spent his youth in a Bombay in the throes of art deco craze.  Only  later when I moved to the city myself and saw things up close did it become clear  to me where his love for elaborate mosaic tiles and checkerboard floors came from!

Mumbai or elsewhere, go looking for floors and you will come across a barrage of jargon,  Moroccan, Italian, marble, heritage, Athanguddi, Azulejos, stone, ceramic, sandstone, composite, Jaipur, chevron, mosaic, terrazzo, painted, inverlochy. There is just too much to choose from.

Having lost much sleep over a wide range of choices,  I finally know what I am going to do with the rotten parquet.. It is impossible to list my entire reference file here, but will share ideas and inspirations I have picked up along the way in today's post.  I don't have particularly  pretty pictures of floors  tiles and the like, for those you need to head to pinterest, which is rife with stunning effects! These are mostly humble records I made with my iPhone for my reference, while scouring the markets and else where.

Hopefully  with the final finished product which will make a future post and this one, it will be possible to piece together a picture of how exactly the ideas translated to actual floors.

A final word about the inspiration :  The choices I made rest on three different factors, first- the relatively tiny budget, second- somehow ideas registered from travels or surfing the net etc muscled their way in (not just on the floors but rampantly and randomly in other corners too ! More about that later though ) Finally, from in and around Mumbai- my forever Muse!!


Starting with the city it self. I  am taken by old Mumbai  Heritage floors....


Visit any old Mumbai building and you  are sure to notice the  'Mintons'. Richly patterned, startlingly  coloured and beautifully weathered encaustic cement tiles imported to the erst while Bombay Presidency by Liverpool based Minton's Ltd.
In production since the 12th century when  Cisterician Monks in England  hand made  them to pave  floors of European churches and monasteries- the art vanished a few 100 years down the road.  During the 1830s  several British firms  attempted to revive  the medieval art, one of the most successful  being Herbert Minton.

Most old buildings in Fort and neighbouring areas in Mumbai boast these striking tiles from bygone times..
These are cement tiles in which the pattern or figure on the surface is not a product of the glaze but of different colors of clay. A tile may be composed of as many as six colours. The pattern is inlaid into the body of the tile, so that the design remains as the tile is worn down. These may be gazed or unglazed and the inlay may be shallow  as an eight of an inch, or as deep as  a quarter inch.

In  the initial years of  the British colonial period, the  tiles would be imported from England. Until they started to be manufactured locally in the early 1920s. They remained in manufacture until the 1940s. In the recent years,  a few tile makers based in Mumbai and elsewhere have  revived the old style of floorings.

Brightly colored, readily available and easy to lay. Add to it, the wide range of tiles and makes to choose from to suit all manner of tastes and decor.
I chanced upon a stash of these old furniture tiles from Gujarat at a local flea market the other day.. (picture below). I have no idea about their vintage, make and  style etc.. From the look of it, they look like Portuguese inspired, the kind I have spotted in many a old Mumbai buildings. Do enlighten me if you have any idea about these.

I am not quite sure about where these will go in the house at this stage. 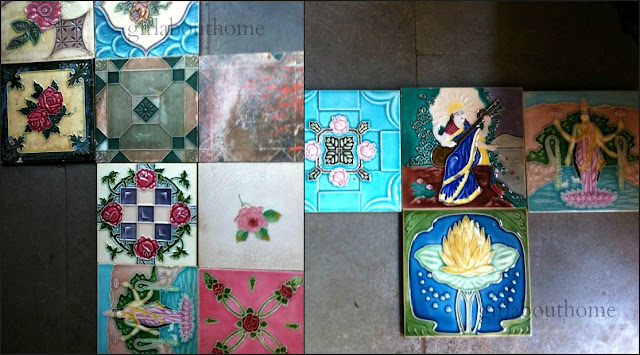 Finally  getting back to my childhood home, I would like to do a spin on the traditional chequered black  and white with a Chevron pattern floor somewhere in the house..

What a lovely post and such a not so usual topic. Those Minton tiles are so gorgeous. With those assorted hand glazed tiles u will have set up a conversation piece.

Gorgeous post, and awesome details, thank you so much! I am a total tile fan myself...and I need to get a new home soon :) to accommodate my tile fantasies!

Strange I tried to leave a msg from my phone it did not work! Anyways just wanted 2 stop by and appreciate this post! really good one very informative. And those tiles look gorgeous!

Hi Ms.Dubey...gr8 to see a post on cement tiles on your blog. The day you inquired about the chevron pattern and also shared your blog details...since then i was follwing your blog. Unfortunately...i was not able to handle your request because of logistics issue but i am sure you must have find out about the tiles in mumbai itself. Best of luck for the work you are doing. Best regards, Bharat Jhawar, KG Tiles

I don't know if you know about this but some tile stores in Mumbai make replicas of these Minton tiles. They're obviously not as good, but they look similar and make up for some of the lost value.

Bharat:
Thanks for your time! I was finally able to source heritage tiles fom a manufacturer in Mumbai, also we managed to lay a chevron using granite and marble thanks to a skilled mason. DO hope to be able to work with your company in the future.
P.M. :
Yes! was able to source tiles from a local manufacturer of heritage tiles as the cement tiles are called now. Not a patch on the older version like you say, but interesting nonetheless. Thanks for dropping by.

hi, i loved you post and the flea market tiles are beautiful....can you please point out where you found them in mumbai? as i am also from mumbai would love to check them out.
thanks!

@ sneha : There are plenty of shops in Chor bazar that deal in old furniture tiles. If you are looking for cement tiles for the floor, Bharat Floorings in Fort has a select but stunning range of heritage revival designs. hope this helps.

Hey where in Mumbai is this restaurant and building exactly?