On a fine morning, the bar at the Devigarh Fort Palace is the best vantage point to savor the  local scenery from.  Sitting on the many comfortable reclining day beds, it is possible to take in the lush post-monsoon vista of the Aravali ranges. The spacious verandah richly decorated in bright yellow and red colours, frames  the rolling hills, glistening waters of lotus choked ponds, tiny flat roofed houses of the neighbouring Delwara village beautifully- in short all the bucolic one will ever want !

And how wonderfully this renovated,  16th century home of Rajput warrior chief Sajja Singh frames the beauty around !  From carved Rajputana-style windows, balconies,  a lazy poolside, floor to ceiling windows of  bathrooms of the property's many suites.. pretty much everywhere. So much so, that it is hard to say what stunning sight will await one at which corner.

The painstakingly restored medieval royal residence presides  over the village of Delwara, 28 kilometers north of Udaipur. Its many storeyed construction looming above the village's flat roofed houses.

The Delwara estate was given  by Rana Pratap Singh of Udaipur to Sajja Singh in reward for his support in battle.  The vertical structure of the place was subsequently built by his descendants over a period of time. The palace grew  around the zenana courtyard, its construction over many levels making the most of the stunningly beautiful vistas around.

Following a extensive seven year old restoration process, the once crumbling structure of the palace was arduously brought back to life in 2000.

The past exists in a fine balance with the present in the newly done up rooms of this all- suite property .  Built using a neo-Rajput idiom achieved through the use of traditional elements such as marble, semi precious stones, mirror work, mother of pearl, plaster work and vividly toned murals, albeit with a definite contemporary twist.  Even as the traditional materials are handled according to age-old techniques,  the end result is by design,  modern.

The property is the foremost among the recently renovated royal palaces so far as a modern, eclectic  design sensibility goes. Here  the past is delightfully and most elegantly reconciled with the sleek lines of modernism. There are witty references to historical architecture albeit created in a modern spirit sprinkled all over the palace in tiny details.

While old palaces and homes all over the country are actively being restored, in some instances the work involved goes beyond mere rehabilitation of the structure. Genuine looking, but entirely new additions- dining halls,  modern bathrooms and swimming pools – are painstakingly made, such that the changes are not apparent to the  visitor. 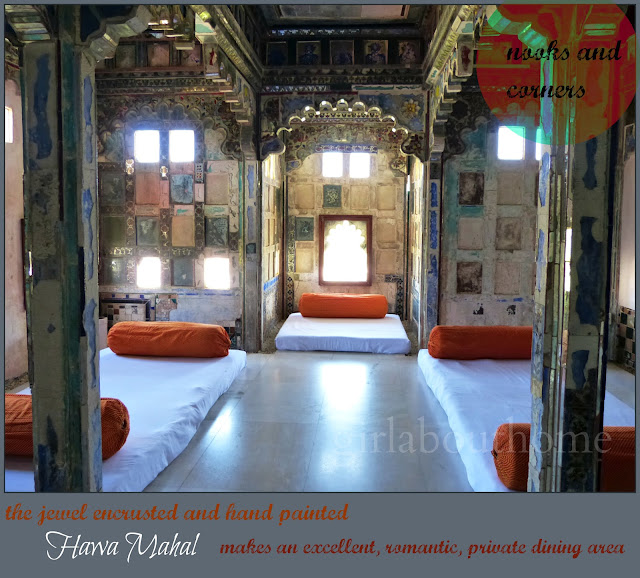 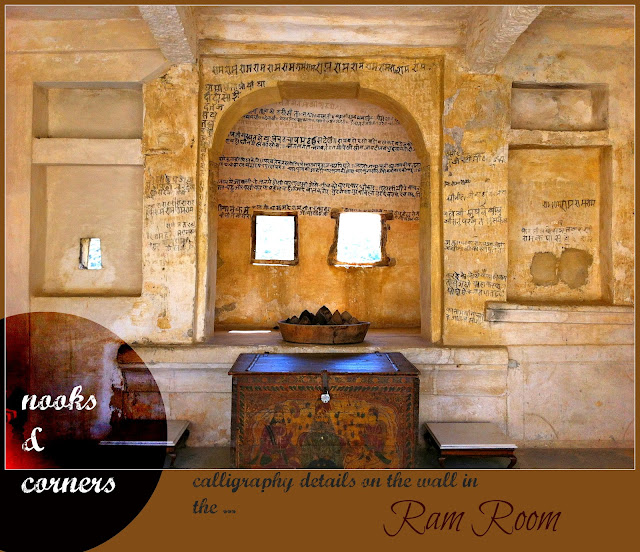 The above two are among the hotel's many private dining nooks. There is no saying which delightful corner one will encounter on an exploration around the property! 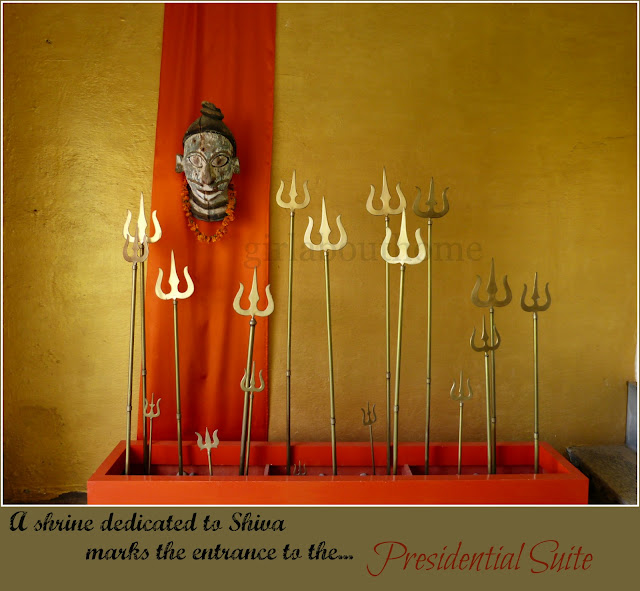 A witty a reference from the past  presented with a modern twist. 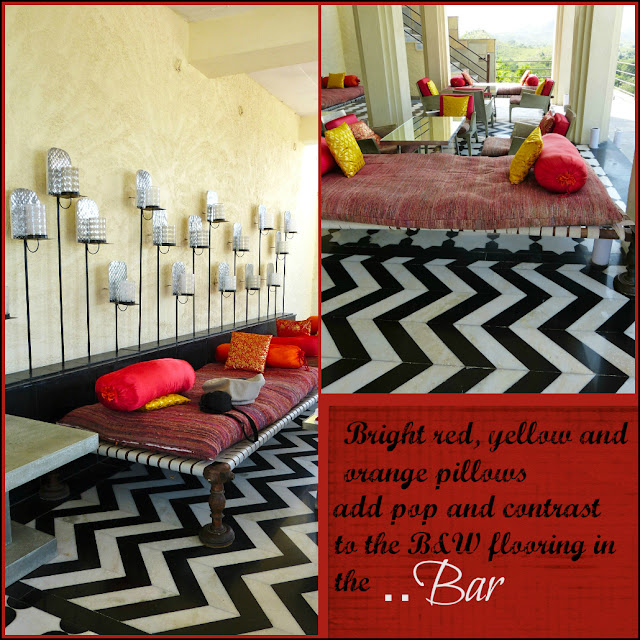 Bright contrasting colours in the Bar are in stark contrast with the minimal, almost monastic palette of the rest of the hotel. 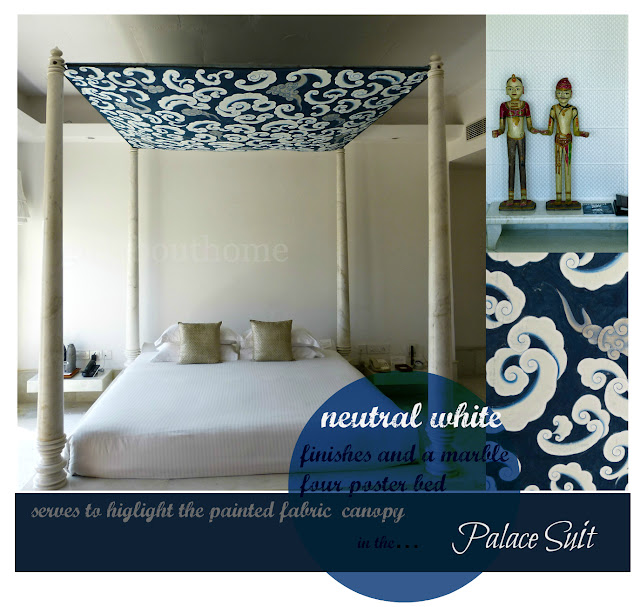 The Palace Suite is the only suite I had access to over this trip. Pictures from the other rooms will make for a whole new post ! 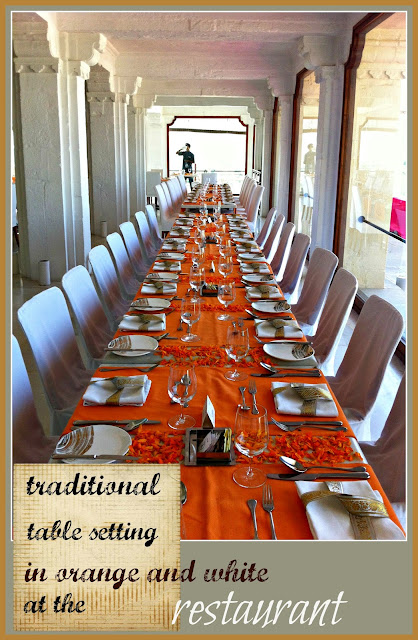 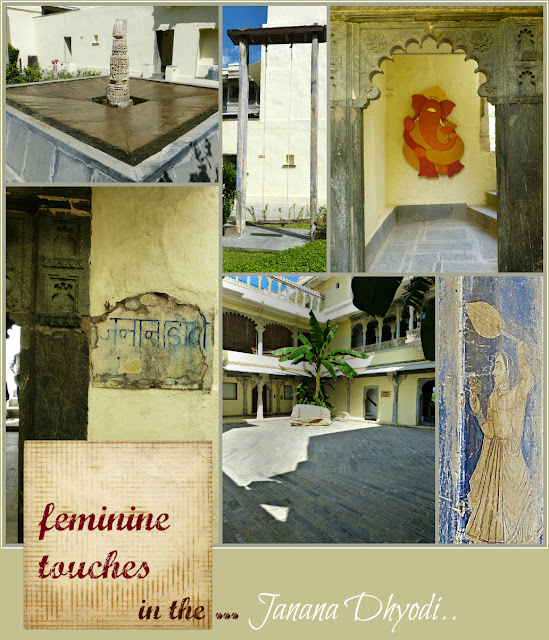 The Zennana, around which most of the palace is built is a beautiful nook peppered with interesting details...such a an old swing and a square shaped fountain.. 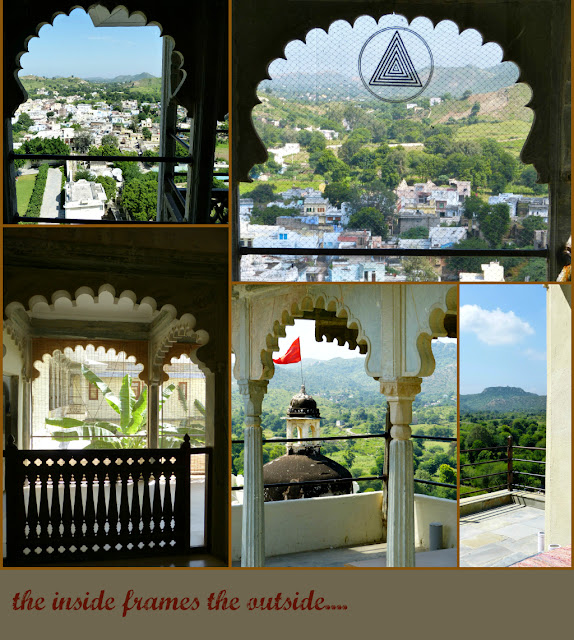 Finally the beautiful countryside framed by some of the palace's many windows and arches..

This post is a result of a wedding in the family  that is being planned at the property by the end of this year.  This one is from a recce trip I undertook over the weekend... Being part of the prep has been very exciting this far ! I will come back with yet another post about the Royal theme wedding later  hopefully...for one post is really not enough to include all sights the palace has to offer. But that is a few months away.. ! Until then hope you have enjoyed snippets from around the stunning Devigarh Fort Palace...

lfantastic post and Thanks for sharing this info. It's very helpful.
heritage hotel in jaipur

Arch and Anu: Thanks a ton!
@ Amit Shukla: Thanks for dropping by!

Beautiful post!! Now I so want to go there after seeing these photos.