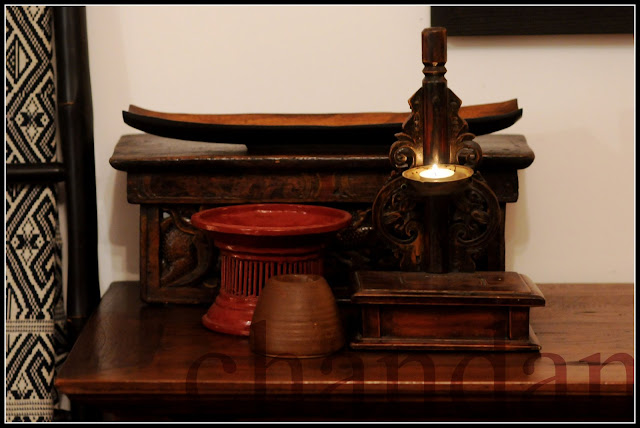 Posting a few pictures of a quirky little stand I found a few days ago.
A carved handle attached to a tiny wooden rectangular stand, which has a tiny little drawer at the side. It is hard to say how old it is or what purpose it might have served.

For now it is happily lending itself to different uses around the house, mostly ornamental. To house a single stem here. 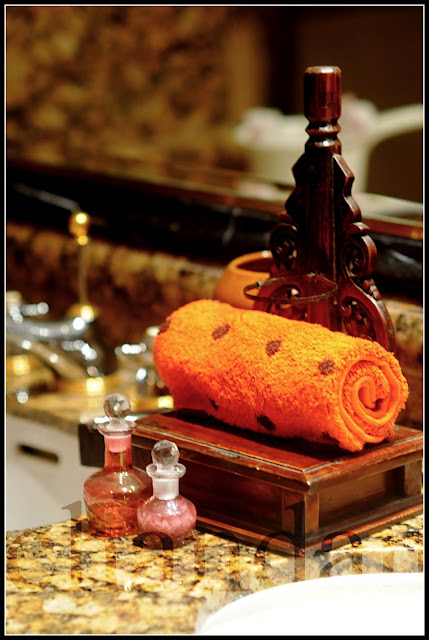 towels and little things in the bathroom. 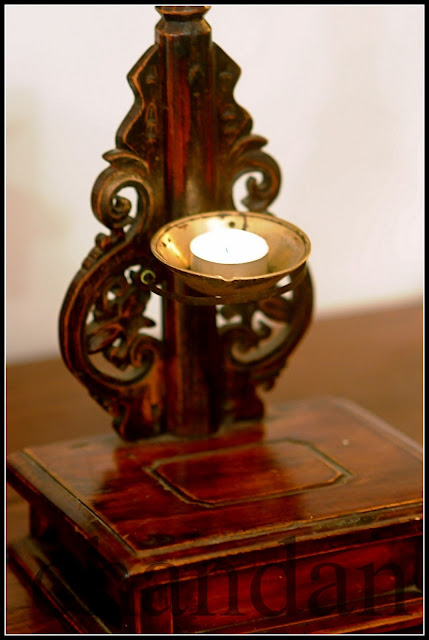 Or simply a tea-light sometimes.....

Had started a thread  a few months ago, only to leave it in limbo like many other things  that need to be done until something the other day reminded me of M.
Sweet, young and kind of forever pregnant with a protruding belly bearing twins the first time I met her and very quickly, with  a sickly little girl born premature only to die a few months later.
When I think of M, I remember  curly long hair always worn in a single  oily plat and funny ever changing shadow like marks--near the eyes sometimes or near where her cheeks sunk into deep dimples when she smiled.
She lived with the twins and ailing parents in a mud and brick house, right across from the house my family rented for the three summers we spent in her tiny village near Trichy.
If I stuck my nose far enough between the trellis patterned grille on my window, I could have a good look at her house and the backyard. A simple affair like the others in the village. Squat, rectangular, covered with ramshackle red black tiles.  A porch running its length. A very white house barring a few flashes of green for windows and doors.
I could see a cattle shed at the back with its two pointy horned beasts. Here M  spent most of her day thwacking dirt with a stick broom,  a stone and mud well where her father did his early morning gargles- loud enough to rouse the village and beyond. What I could not see too clearly was a kitchen that the back door led to. A  window less room, made even more glum  with years of soot climbing up the walls and the chimney.
I have vivid recollections of drinking coffee sweetened with tiny jaggery dumplings in her kitchen. Her mother called it `Kapi', the, sweet dark broth that left brown sand like grit at the bottom of little tumblers.
I had to steal into her house after school to drink the coffee, and that was the best part.
For reasons I only understood partially then, my mother strongly disapproved of us going to M's house. I had a feeling it was because of this funny looking man I saw on the porch one morning a few weeks after we came to stay in the village.
I saw him  sitting on his haunches in a dirty vest and rolled up lungi tied at the waist in a half skirt. Large red eyes looking vacantly at nothing in particular. A dark and brooding guy with curly black  stubble for hair.  His mere presence giving  the house an oppressive air.
I understood why that night when we woke up to loud noises coming from M's house.
Groggy and heavy with sleep , I looked out of the window to see, M's parents hunched over near the door on the porch. Loud screams followed by whimpering noises echoed out of the house for long.  I did not see M the next day. She emerged a day later in her backyard scrubbing the shed as usual.  She had a few new shadows on her face,- angry and purple.
We soon realised it was a frequent event in the life of the household and the village. Occurring every fortnight or so when M's husband Mutthu - the dark guy sitting on the porch -would come visiting from his transport business in Erode.  I heard people murmur, it was because Mutthu was a `drunk' and it was some `business'  between husband and wife.
The only night I saw anybody bother about it was a few weeks later, when my father went up to their porch and asked M's father to stop Mutthu.  The old man just shook his head in quite desperation and murmured something about fate and not having done his bit years ago when the girl was born in the first place.
I remembered M well, but comprehended her story fully only years later as an adult myself.
Posted by Chandan at 5:14 AM 5 comments: